Exactly 10 x 10 x 10 centimetres – that’s how small and symmetrical the BDSAT nanosatellite is, which will be carried into orbit by a Falcon 9 rocket from the US company SpaceX on Friday 1st April 2022. It carries technologies that will be tested in space: special pressure sensors or an alternative solar power system, the so-called supercapacitor bank. If the technology proves successful, it could replace or supplement conventional satellite power banks in the future. Specialists from BD SENSORS, Spacemanic and scientists from Brno University of Technology collaborated on BDSAT.

„We worked with the BUT on the design of a pressure sensor for space applications, so it was clear that we wanted to test it in real conditions in space. Work on BDSAT started in 2019, but we have been working with BUT for many years,“ says project manager Tomáš Valer from BD SENSORS, a company specialising in pressure gauge research and development. But this is not the only technology that the nanosatellite, or so-called cubesat, wants to test in space.

„The second part of the technology experiment is to test the use of supercapacitors as an innovative solution for storing electrical energy in satellites. In the future, a bank of supercapacitors may replace conventional battery power systems. As the satellite orbits, it is turned towards the Sun for part of the flight and charged by solar panels. During the shadow flight, energy from this source will be consumed,“ explains Radimír Vrba, director of the CEITEC BUT science centre, which is involved in the BDSAT project.

The construction of the BDSAT nanosatellite took place in the clean rooms of BD SENSORS. „Spacemanic company then participated in the overall construction of the nanosatellite: from the supply of the on-board computer to the primary power supply to the communication antennas. The final insertion into the ejection part of the satellite was done thanks to colleagues from Exolaunch in Germany,“ adds BD SENSORS Technical Director Martin Šimoník.

The ground station, which will receive the signal from the satellite and control it remotely, is located in the Laboratory of Experimental Satellites at the Institute of Radioelectronics of the FEEC BUT. We currently have two other satellites in space. In the last year, we also managed the Czech-Slovak-Hungarian-Japanese satellite GRBAlpha,“ describes Miroslav Kasal, a specialist in radio communication, lists the team’s experience. It is from this laboratory that the first connection with the cubesat will be established. „Within half an hour of launch, the nanosatellite will be in orbit, but it may take several hours to start transmitting a signal and establish a connection. It also takes another couple of weeks to verify that all systems are working properly and delivering data,“ Kasal adds.

The Falcon 9 rocket will carry dozens of cubesats into space, but only BDSAT will be connected to Brno University of Technology. „We will continuously evaluate the data; for example, we will test up to ten different scenarios for the supercapacitor bank to thoroughly verify its function. We are planning a lifetime of at least two years. The longer the nanosatellite keeps transmitting, the better, because the more valuable data we can get. But of course the device is affected by radiation in space, so we’ll see how long the cubesat lasts. But there are nanosatellites that have been in space for more than five years and are still working,“ Valer points out. BD SENSORS will, among other things, supply sensors for the Gateway orbital station around the Moon. A number of BUT graduates work in this company from Buchlovice; indeed, the company’s owner Karel Mareček is one of the first graduates of microelectronics at BUT.

This project is implemented with financial support from the state budget through the Ministry of Industry and Trade in TRIO program. 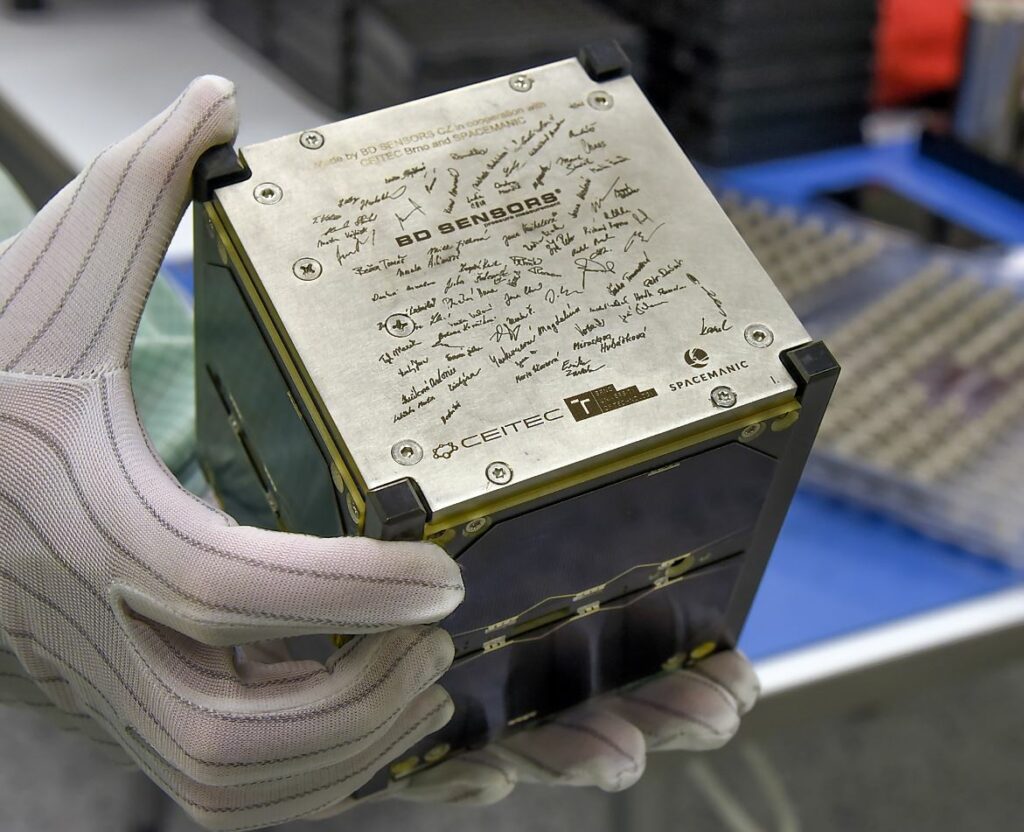 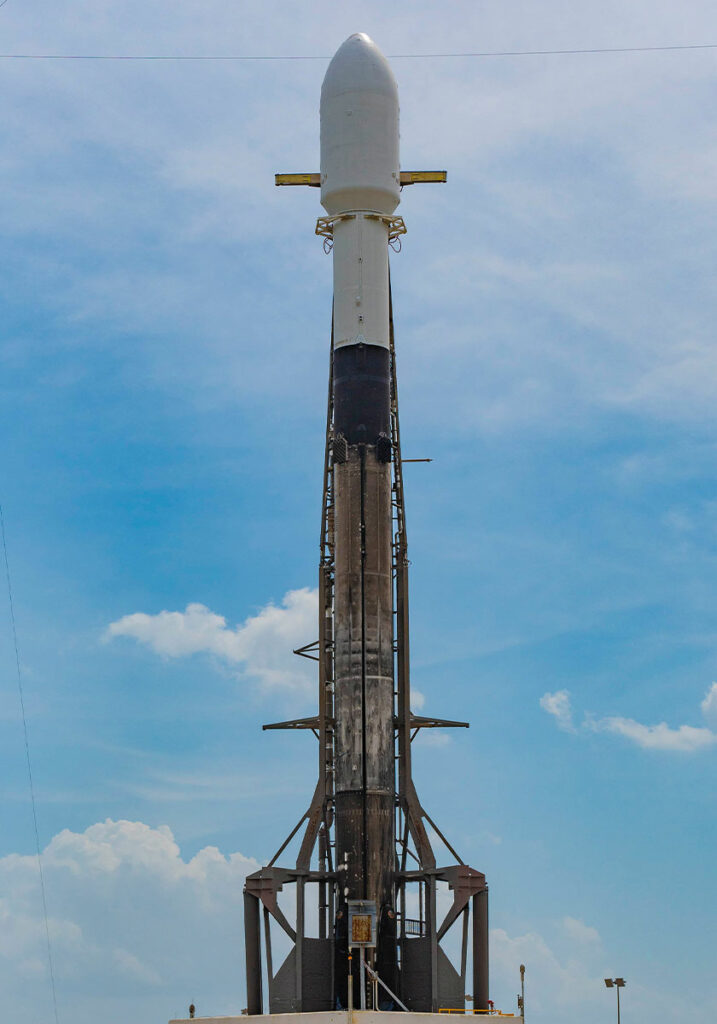 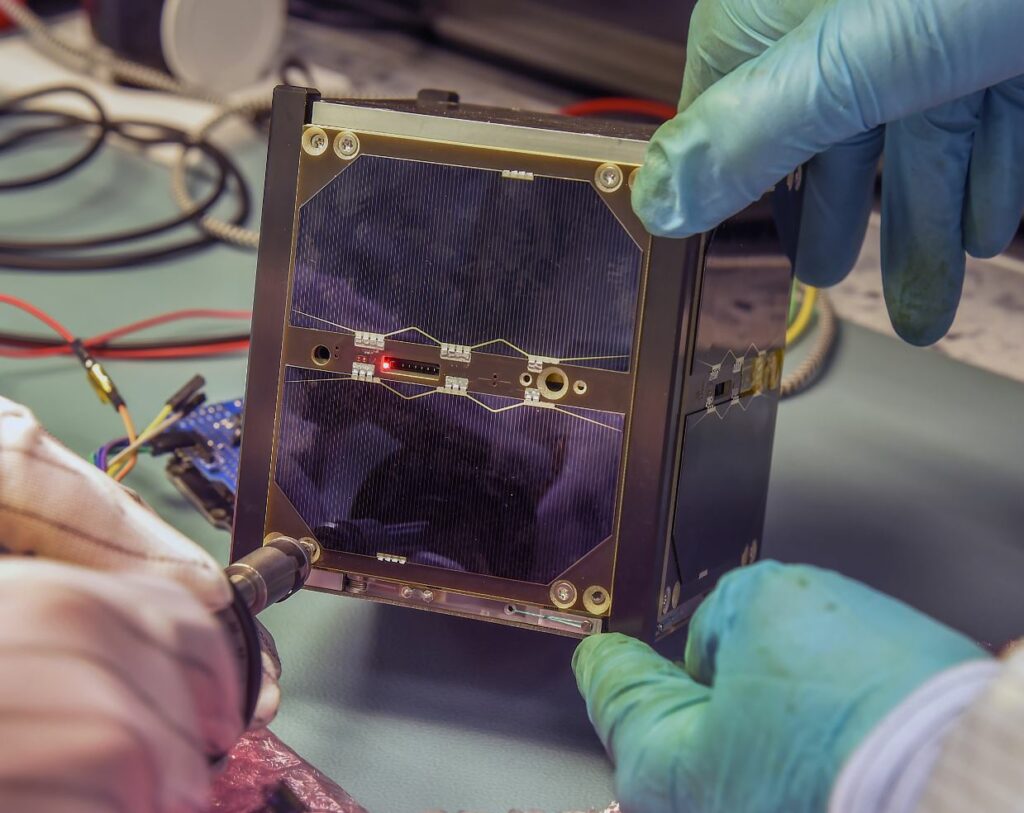 The Slovak nanosatellite will soon be followed by the Czech one

On Monday, March 22, the Soyuz 2.1a rocket successfully launched and also brought the Slovak CubeSAT GRBAlpha into orbit. The name of this CubeSAT, measuring 10 x 10 x 10 cm, is an abbreviation of the words Gamma Ray Bursts and Alpha. This describes its mission, which is to detect the gamma flashes.

GRBAlpha thus builds on the success of the first Slovak satellite skCUBE, and is also the first step for the planned fleet of CAMELOT nanosatellites for measuring and investigating transients.

Data collection and communication with the satellite is provided also by the ground station of the BDSAT project. This is the project prepared by the BD SENSORS Space Division in Buchlovice together with the co-investigator CEITEC VUT. Cubesat BDSAT will aim to measure the pressure in open space conditions. This is a great opportunity to test all BDSAT communication subsystems, because GRBAlpha has a similar radio, the same antennas and software on the ground station as the upcoming BDSAT.

The launch of the BDSAT satellite is planned for 2022. 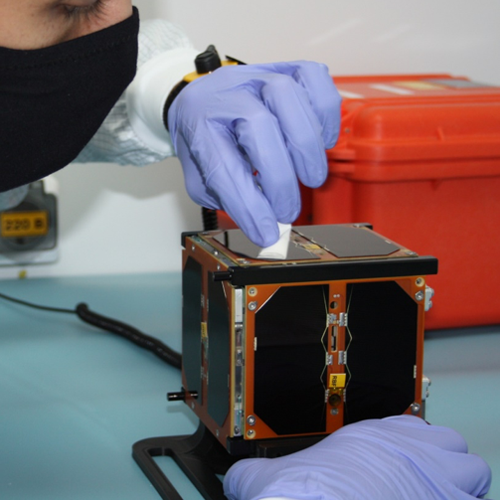